Google’s new Material Design is not only limited to Android and its apps. The company has made its clear that all its current and future products will make use of the Material Design guidelines across all platforms to deliver a rich and consistent user experience.

Now, according to the folks over at Android Police, Google is prepping an update for the Play Store app on Android with a revamped UI keeping its new Material Design UI guidelines in mind.

The new design puts the content of a listing in the front and makes gracious use of its (the app, game or movie’s) cover image or video as the background.

The listing content and its surrounding icons have also received a nice make over with the reviews and the average rating chart having a particularly slick look to them.

Interestingly, as pointed out by Liam, the option to share and interact with the content has been moved from the action bar on the top to below the actual listing. This actually seems like a regression to me, in terms of usability, as it would require a few additional steps from the user to share or +1 an app on the Play Store. Here’s hoping that Google is still playing around with the layout and places these buttons back on the top and the action bar.

I’d also say that we should expect the web version of the Play Store to receive a major Material Design makeover right around the time Google releases the final build of Android L for its Nexus and Google Play edition devices.

What do you think about the new look of the Play Store? Drop in a comment and let us know! 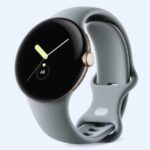 Here’s How Much the Google Pixel Watch Could Cost