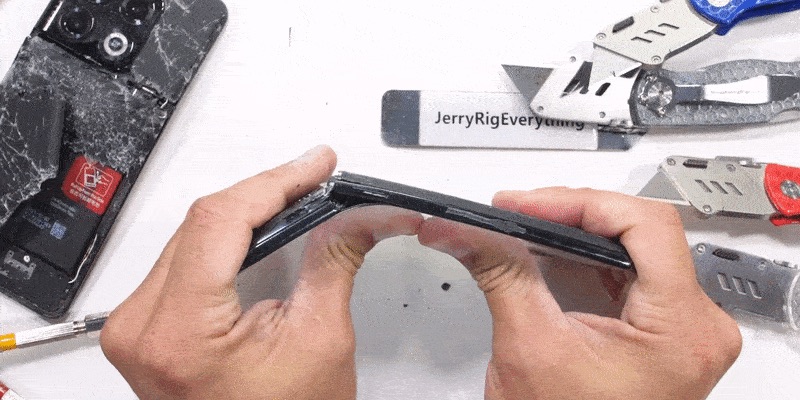 Update (August 23, 2022): OnePlus has issued an official statement in response to the bend test, which you can find down below.

Original article (August 22, 2022): OnePlus launched its OnePlus 10T earlier this month. While the smartphone received praise for its competitive pricing and the latest flagship chipset, a new video of the OnePlus 10T has shown that its durability is also not exactly at the top of the class.

JerryRigEverything, the YouTuber who regularly posts durability test videos of almost all the popular smartphones, has posted a video of the OnePlus 10T going through his classic scratch, flame, and bend test. Like most smartphones, the OnePlus 10T passed the scratch and flame test without any issues.

Interestingly, OnePlus’ previous flagship, the 10 Pro, also cracked at the same point — just below the rear camera module and above the battery. While Jerry says that the 10T is much tougher to bend compared to the 10 Pro, the smartphone still snaps into two halves. This suggests that OnePlus might have to re-do the internal layout to improve durability or use a tougher material to construct the smartphone.

Although it’s generally not advisable to put such stress on any phone, it’s still surprising to see a phone break in half with just your hands — especially since smartphones like the Pixel 6, Samsung Galaxy S22, and even cheaper ones like the Nothing Phone 1 performed better in bend tests.

You can watch the full OnePlus 10T durability test video down below:

Update (August 23, 2022): In a statement to Gadgets360, OnePlus said that the 10T meets all the standard durability testing procedures and can bear over 45kg, even though the phone brutally broke into two parts using just two thumbs. The following is what OnePlus had to say:

“The OnePlus 10T meets or exceeds all of OnePlus’ extensive durability testing procedures, this includes a pressure test where the device is suspended while weight is applied to its centre on both its front and back. The OnePlus 10T has an enhanced structure engineering design and can bear over 45kg of external force in this test at OnePlus’ lab,” said OnePlus.

Even though the bend test is a little extreme compared to real-world scenarios, it gives us an idea of how weak the structure of the phone is. Perhaps the company should rethink its internal design and/or use stronger materials for its upcoming smartphones.