Samsung Galaxy A20 and Galaxy A10 Tips and Tricks The below tips and tricks will help you in getting the most out of the Galaxy A10 and Galaxy A20 whilst also help in discovering hidden features of the handsets.

Samsung Galaxy A10 and Galaxy A20 Tips and Tricks

The Galaxy A20 comes with a traditional fingerprint sensor located at its rear. Apart from using it for locking/unlocking the handset, you can also use it for quickly expanding the notification panel. The feature is disabled by default though, so make sure to enable it from Settings -> Advanced features -> Motion and gestures -> Finger sensor gestures. RELATED :Samsung Launches Mid-Range Galaxy A73 and Galaxy A53 Smartphones

#3 Save Photos/Videos in HEIF/HEVC Format

With only 32GB of internal space, you really cannot go all out clicking photos and recording videos on the Galaxy A10 or Galaxy A20. To maximize the utilization of that space though, you can save photos in HEIF format and record videos in HEVC on the handsets. Doing so will lead to considerable space savings, though do note that older phones and PCs will not support HEIF/HEVC media files.

One of my favorite features in One UI is the excellent Night mode. It is a system-wide dark theme that has been implemented extremely well by Samsung. It is available on the Galaxy A10 and Galaxy A20, though it looks far better on the latter since it comes with an AMOLED display.

On devices with an AMOLED display, a dark mode will help save battery life. Plus, it is also incredibly easy on the eyes as well. You can enable Night mode on the Galaxy A10/A20 from Settings -> Display. Another handy customization feature which is a part of One UI on the Galaxy A10/A20 is the ability to change system fonts. While Samsung itself pre-loads a few system fonts, you can also download additional fonts to your liking from Samsung’s Galaxy Store.

To change system fonts on the Galaxy A30 or Galaxy A50, head over to Settings -> Display -> Font size and style. Tap the Download option and you will be redirected to the Galaxy Store from where you can download more fonts. However, apart from 2-3 fonts, all other system fonts on the store are available only as a paid download. 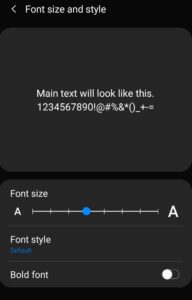 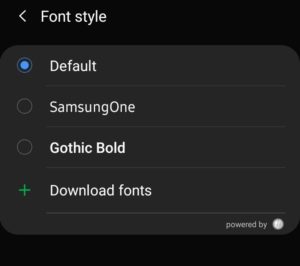 There are quite a few useful motion gestures on the Galaxy A10 and Galaxy A20. Some of them are enabled by default while others are disabled. You can find and enable/disable the ones you like by going to Settings -> Advanced features -> Motion and gestures. My recommendation would be to enable Smart stay, double tap to wake, and Smart alert since they are useful gestures to have.

Impressively, Samsung has included the Digital Wellbeing feature on the Galaxy A10 and Galaxy A20 as well. This feature was first released by Google as a part of Android 9.0 Pie and Samsung has integrated it nicely into One UI and ensured its available on all its devices. The Galaxy A series packs a number of features that are found on Samsung’s flagship devices. Among other things, this includes Dolby Atmos support. While it is not going to make a massive difference to sound quality, audiophiles are still going to appreciate the inclusion of it. Enable Dolby Atmos from Settings → Sounds and Vibration → Sound quality and effects. You can keep the Dolby Atmos setting to Auto, though if you primarily see movies, you can switch over to Movie mode.

The Galaxy A10/A20 also come with Adapt Sound, a feature that is usually found on flagship Samsung devices. As the name suggests, using this feature, one can tweak the sound output over earphones from the phone to adapt to their own hearing. This is a great feature to have if you own a decent pair of earphones and are a music buff.

You can set up Adapt Sound on your Galaxy A10/A20 from Settings → Sound → Adapt Sound.

What are some of your favorite tips and tricks for the Galaxy A10 and Galaxy A20? Drop a comment and share them with our readers!